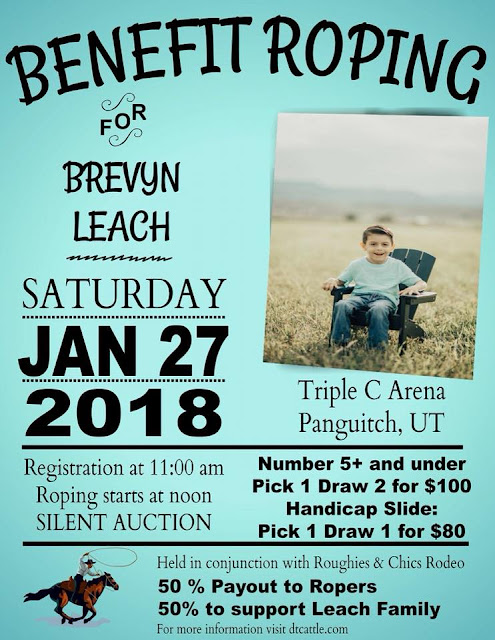 Posted by Teresa Fackrell at 1:16 PM No comments:

Letter To NLBRA Board

I am inquiring about the Jr Iron Man competition. 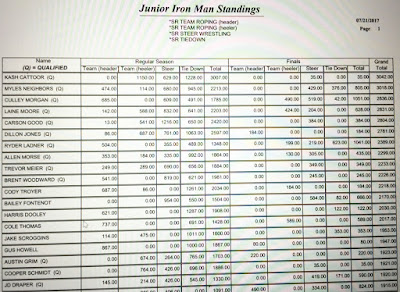 Email July 25, 2017
Jr. Ironman Committee Recommendation to full Board
The Jr. Ironman Committee met by phone earlier today. They discussed the top 10 in the standings for the Jr. Ironman to determine qualifiers to advance to the Lazy E Timed Event Championships representing the NLBRA.  The committee discussed what they were looking for and how to best send the strongest qualifiers to compete in the Lazy E Jr. Timed Event Championships in March 2018.

The Committee decided to send the most well rounded group of boys that they could who had accumulated points in heading, heeling, steer wrestling, and calf roping. They also looked for boys who had personal characteristics, attitude, ethics and sportsmanship that the NLBRA can expect strong representation from.
Those contestants decided upon were:
1. Ryder Ladner
2. Miles Neighbors
3. Culley Morgan
4. Laine Moore
5. Carson Good

This is the committee recommendation brought forward forth to the full board for approval.  Please direct any questions to Kevin Hollingsworth, Jr. Ironman Committee Chair.

I would like answers to why you completely eliminated Kash Cattoor from the whole competition. According to the official standings, he won the competition with the highest points earned in all events required.  I have been asked by several members of this association from all states why Kash was not in the Jr Iron Man contestants when he was the highest point contestant.  So I ask you to clarify this for me and to the members why he was completely taken out of first place position?  Also why was he the only contestant in the top 5 to be completely removed?  Also why 7th place position filled the number one spot?   What about the guys in second through fifth place spots, by removing Kash shouldn’t they have just moved up?  What happen to the rule of qualifying with the highest points through out the year?

This association skipped over highest placing kids to be replaced with kids further down the list.  Is this because you feel he is better or fits your agenda?  Or is it favortism. I was anomalously sent a thread of emails discussing Jr Iron man a year ago and I found this statement very contradicting,

On Mar 23, 2016, at 8:24 PM, Sam Stoddard wrote:
“I just don't like the "wild card" at all. I think that if we make 1 qualify, then we make them all. The first time we skip over the next highest placing kid to pick up the kid further down the list just because we feel he's better, we are opening a huge can of worms. I think that if they want to use the other spots to "pick" contestants that's up to them, but I think ours should all qualify. And by taking the top 2 in the 4 events from the year and the top 3 in the 3 events at the finals it takes all speculation of favoritism out of the equation.”

It seems like there was a lot of favoritism in the contestants selected.  What do members think about that kind of integrity in this association that creates an unfair environment with the contestants?  As seen continuously by members of this association, the board can vote to change by laws conveniently whenever they want.  Here is the evidence of one of the many circumstances where rules have been changed after the season began.

According to the March 2017 meeting minutes online it states, “The committee recommendation is for the top 5 Senior Boys with the total world points in Calf roping, steer wrestling, and team roping after the finals and who meet board approval as being representational of the NLBRA, as will be determined by the committee, will qualify for the Jr. Iron Man positions at the Lazy E during the adult Timed Event Championships.  Contestants must win points in all 3 events.

Upon receiving the email Kash immediately responded to the board requesting definitive criteria for the selection of removing him from first place and replacing him with seventh place.  Definitive criteria has still not been provided.

As far as Kash being a competitive well rounded athlete, he won 3 of the US Ropings that took place at the Lazy E right before the finals this year and he was top 4 in tie down roping and 5th in steer wrestling in the state of Arizona.  He competed in the High School National Finals in 2017.

According to the facts of Jr Iron Man qualifications, Kash Cattoor was first in the competition according to your standings.  However, he was completely removed and replaced with seventh place contestant.  There have been no definitive criteria as to why this change has been made so it appears that the board based their decision on personal bias.  Unfortunately, the contestants cannot trust that their qualifications will count if the board chooses to go a different route then the stated qualifications.

Email ThisBlogThis!Share to TwitterShare to FacebookShare to Pinterest
Labels: NLBRA Board 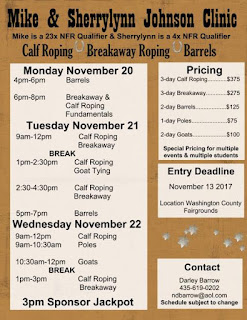 Posted by Teresa Fackrell at 11:45 AM No comments: